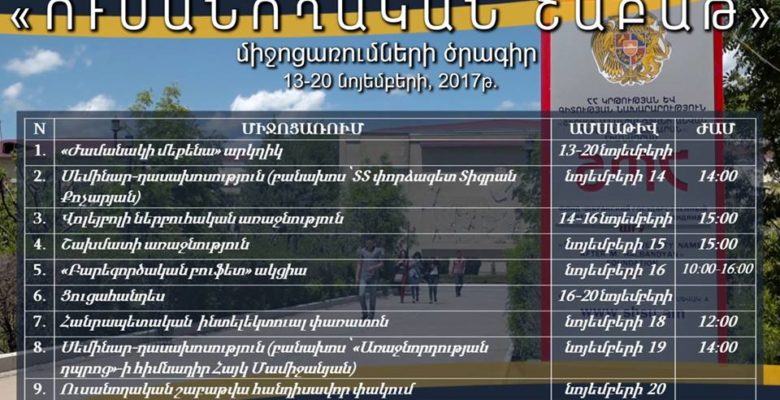 The events on the “Students’ Week” in ShSU got started with the lecture of the rector Mr. Sahak Minasyan. It were the students that had chosen the topics to be touched upon by the speaker of the day.

The lecture on information security delivered in Shirak’s main university by expert Tigran Kocharyan who explained everything concerning the personal, job and national security.

Also got started the intra-university volley-ball competition. The first match was between the teams of the Department of Nature Studies and Mathematics and that of Social Sciences and Law. The best team of the University will be named on November 16, after the final match.

The small box in the foyer is called “Time Machine”. The students have an opportunity to formulate their wishes in five points and leave them in the box. The question is: “What would you do if you were in the Education Management Department?”

On November 15, the brain-game chess championship started. The tournament involved 10 students and lecturers and was rather spectacular. The winner was the best chess-player in Shirak State University Rafik Khachatryan.

An action “Charity Cafeteria” was held in Shirak State University. On the students’ initiative, the university cafeteria will work for charity one day and the whole income will be used to help children from poor families.

On Saturday, Shirak’s main university was filled with an intellectual atmosphere. 17 teams of students and pupils from Yerevan and Gyumri contested to be called the best.

On Sunday, a seminar-lecture was delivered in Shirak State University. The theme was “Public Speaking and Rhetoric”, the speaker – Hayk Mamijanyan, head of the political school “Andranik Margaryan”.