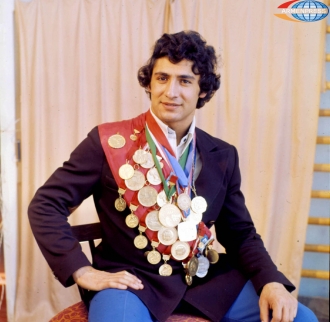 At the age of 62 died the legendary weightlifter Yuri Vardanyan.

Yuri Vardanyan was born on June 13, 1956, in Leninakan (now Gyumri). In 1970 he undertook going in for weightlifting coached by his uncle Sergey Vardanyan.

In 1974-1980 he studied at the Department of Physical Training at Leninakan State Pedagogical Institute after M. Nalbandyan from which he graduated with the qualification of a teacher of Physical training.

In 1975-1976 he became a World and Europe juniors champion in the weight category of 75 kilograms.

In 1980, being the first in the medium weight category, he raised he double-event index up to 400 kg. In 1980, during the Moscow Olympic Games, he was awarded “Golden Kilograms” (for lifting the weight greatly overcoming his own body-weight). In 1985 Yuri Vardanyan won 111 medals in different competitions. During the coming years Yuri Vardanyan remained unexcelled in his weight category. In 1985 he won the World Championship. In the same year, he was elected deputy to the Armenian SSR Supreme Council and got engaged in politics.

In 1991 he left for the USA for permanent residence. There, he got engaged in coaching and social activities. In 2009 Yuri Vardanyan was appointed Armenian President’s Advisor. On May 8, 2013 he was dismissed from President’s Advisor and appointed Minister of Sports and Youth Affairs of the Republic of Armenia.

On June 24, 2014, due to the Resolution of the Armenian President, he was appointed Ambassador Extraordinary and Plenipotentiary of the Republic of Armenia to Georgia.

During his sporting career, in 1978-1981, Yuri Vardanyan was recognized the World’s best weightlifter and seven times had been among the best 10 sportsmen in the USSR.

The best Armenian weightlifter of all times has been the pride of the whole Armenian nation, especially of his birthplace Shirak Region. The staff of Shirak State University condole the family and relatives on the death of our world-famous graduate.