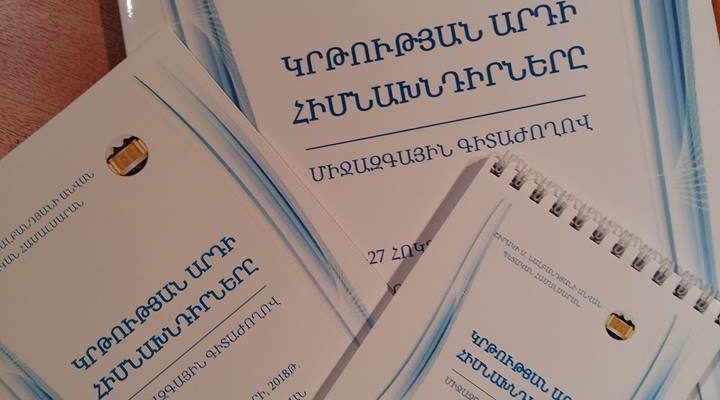 The International Scientific Conference was held at Shirak State University on October 26-27, 2018. The aim of the conference was to discuss the improvements made in the sphere of general and higher education, the current key issues of education, the latest methods of teaching, as well as to exchange opinions and make necessary suggestions on the mentioned points.

About 120 specialists from several universities in the corresponding spheres had applied for participation both from Armenia and from Russia, Georgia, Czech Republic, Slovakia, Rumania.

On October 26, 2018, the work of the conference was arranged in a plenary session and in three sections – pedagogy, private methods, special pedagogy. At the plenary meeting the ShSU acting rector Mr.Yervand Serobyan made a greeting speech, after which the greeting messages from the RA Minister of Science and Education Mr. A. Harutyunyan and Head of the Science Committee, RA, Ministry of Science and Education Mr. S. Harutyunyan were read out. Professors Mr. I. Karapetyan and Ms. R. Mardoyan made reports. The dinner was accompanied by classic music performed by the string quartet with Yervand Varosyan as conductor. After the dinner break the work of the conference went on in the sections, where, according to the programme, the specialists in particular spheres made their reports. As soon as the work of the conference was over, the foreign guests were taken on excursions around Gyumri to get acquainted to its sights of historical and cultural value.

On October 27, 2018, the work of the Conference continued in two sections – pedagogy and private methods. After dinner, which was now accompanied with piano classic performance, the work of the Conference went on in sections and in poster presentations, as per plan. A definite part of the latter was reported in sections and the other – just in the form of poster repots. As soon as the Conference was over its results were summed up by the co-chairs, who proved that in the sections there were heated discussions, exchange of opinions and  suggestion of various solutions to the problems put forward during the sessions. It was also pointed out that after several discussions some reports will undergo partial changes.

During the Conference, as needed, the participants were provided with simultaneous translation.

There was particular assistance from the students who helped provide bilingual translation during excursions, which was a kind of oral practice in translation for them.

The reports that will be authorised to be published after the external review will find their place in the Collection of the Conference Reports.